Gardening is so rewarding, but I do not have a lot of knowledge of seed collecting or cuttings or such like.  When I was doing my own garden, I usually bought seedlings from the nursery and garden centres to plant.
About 6 months ago I was given a courgette and a ‘mini pumpkin’ seedling, tiny little things.  I had no grand visions of them actually growing, but I planted them watered them and checked now and again.
The Courgette plant was eaten by snails almost within the first week.
The mini pumpkin plant grew – against all odds. 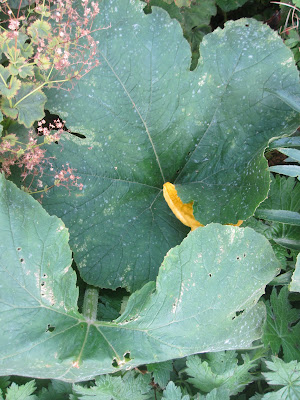 I had planted it in the open space under the washing line; the soil did not look good at all and the space is full of stones, so I was surprised it actually survived. 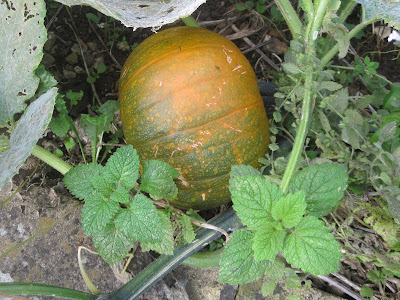 It has grown into a monster plant, bearing some beautiful pumpkins,
with a few more flowers which may, with some luck become pumpkins too. 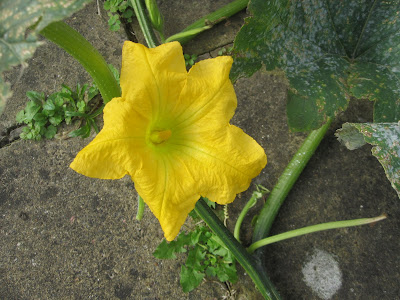 What a delight it has been watching this plant grow. 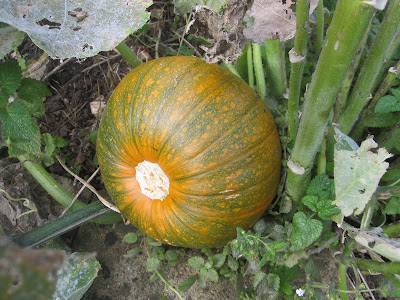 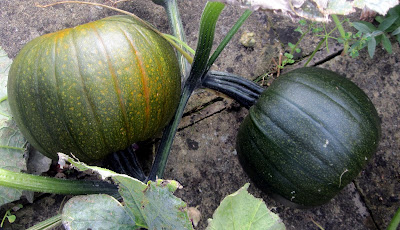 I also planted two tomatoe seedlings one cherry and one plum tomato plant that I stuck in between the geraniums without much thought. 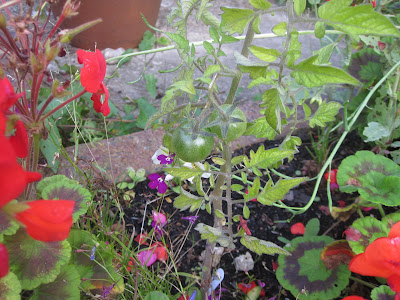 This morning I was taking pictures of my pumpkins and saw there are baby tomatoes!!! 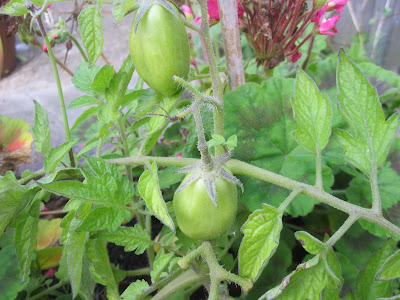 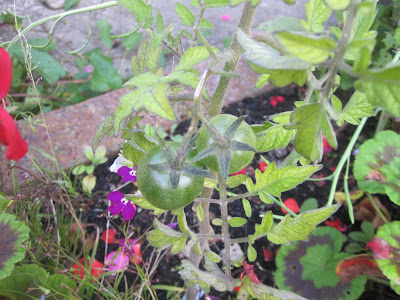 Now all I have to do is try and get these veggies before the insects and birds do.  I have popped the pumpkins on some empty pots to  hinder insects from getting them first 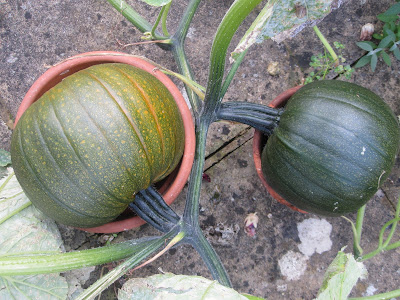 and the tomatoes... well it is a toss up  as to who gets them first me or the birds?

LOVELY! Such a wonderful set of photos too.....we have no pumpkins this year, but last year they spread all over the garden!
Karen

Hi have you tried a toy owl or snake they are supposed to chase the birds or my neighbor puts those shiny helium balloons in a tree to chase the birds.
Those are beautiful hope you get to enjoy your fruits of your labors maybe do fried green tomatoes before the critters get them
very well done you know I can kill anything

Hello there dear friend, Oh, I love to garden. I think you have done a great job, you can harvest your pumpkin soon. Beautiful photos and love your blog. Thanks for commenting on my blog about my new little furry friend, Zoey. Hope you visit again. Hugs, Karie

Thank you for your sweet comments on my blog! And oh, the darling pumpkins! I want to grow some next year. When did you plant them? In summer? They should grace your harvest table'
XO
Eloise

How wonderful and rewarding to see your garden grow!!!

I love your pumpkins! What a delight to see them grow. Going to the pumpkin patch every year is one of our favroite things to do. There's nothing like home grown tomatoes. My dad used to have a garden, and he would bring home some wonderful tomatoes. Have a lovely weekend.
~Sheri at Red Rose Alley

Isn't it wonderful when we get garden surprises? I love those little pumpkins, such a pretty color mix of the dark green and orange... looks like you could have a fabulous vegie garden!